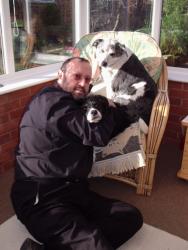 My initial contact with the Trust was way back in 1995. We had previously had a Collie /Fox Hound cross who we sadly lost in 1992 and had taken on a small ball of fun called Meg just prior to Christmas 92. In 1995 we were looking for a companion for Meg and hence arrived at BCT and met with Jenny Booth. The rest is history, we came away with Bess, a companion for Meg and a promise to assist as and when time allowed. Bess’s story was told in issues 7 and 17 of Border Collie World. We attended the Christmas Party in 1998 and came away with another Christmas present in the shape of Holly, who we were to foster for a few months.

The kennels were rather full and this allowed another stray to come in from the cold. We still have the company of Meg and Holly and as the picture shows, I am the one who sits on the floor while these two pinch the chairs. I was asked to become a trustee in 1998 and as others have rightly said it was an honour to be asked and something to seriously think about. My involvement covers the last 11 years and I have watched the trust grow from seeing Jenny with puppies and dogs all around her bungalow, with dogs in kennels “just for a short time” at Birchwood, with dogs being fostered prior to being found a permanent new home, up to the centre we now have and all as a result of the support of people who love Border Collies.

I have spent most years since becoming a Trustee helping at Cruft’s, repairing bits and pieces and doing general maintenance around the site, and acting as Santa Paws at the Christmas Party. Again as others have said, the job description for a Trustee says little about all the other activities you are involved with, but it is fun and an honour to be part of this team

P.S. It is said that we tend to look more like our pets as we grow older, and if that is true then it explains the black and white colour of my beard.