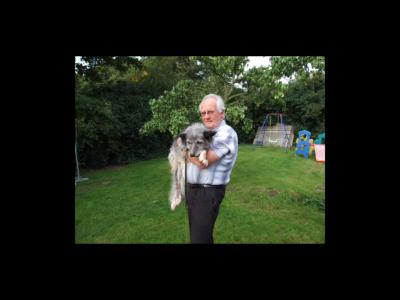 If you have visited the other Trustee’s pages you will be getting an idea of our various reasons for being invited on to the board of Border Collie Trust G.B. I won’t disappoint you by saying my invitation was any different. Living in Uxbridge I am probably the furthest away from the Rescue Centre of all the Trustees.

I had a collie, Trixie, when I was still at school. She went everywhere with me, early morning paper rounds, walking in the woods, playing football with my mates. She was my faithful companion. Later on when I married Jan, my “better” half, we rescued an abandoned Cairn terrier X in Scotland, whom we named Dusty, and acquired a West Highland White as a companion. Unfortunately after a long and happy life Dusty passed away and the Westie was so miserable we had to get another companion for him.

My heart wouldn’t let me do anything but help out another dog in need of a good home and we ended up with the first Border Collie of our own, Misty, so called because she was collected from a local rescue centre on a damp and very misty day! By this time I had decided to go to a local dog training club to do the proper thing, and funnily enough Agility was just beginning to get started.

From then as various dogs have passed over the Rainbow Bridge I have always taken on a rescue and it was about 14 years ago I approached the Kennel Club for details of a rescue centre that dealt with Border Collies. I was given the telephone number of Border Collie Rescue as the Trust was then known. Although I shouldn’t say it, I did have a Black and White and was looking for a Blue Merle, and Jenny Booth came up trumps with Lewis. It wasn’t a name you could stand in an agility ring and call so we changed it to Lad. We picked him up from the fostering kennels being used at the time.

Over the next few years I visited Crufts to let them know how Lad was doing and helped out where and when I could and was very surprised and honoured just over 10 years ago to be invited to be a Trustee. I have seen the Trust go from strength to strength over the years and I am proud to have been part of the progress. If you attend Agility shows you may find me with the Collie Shop in attendance or at Paws in the Park, All About Dogs, Dogs in Need Agility Show, Crufts and Discover Dogs. Come and say “Hello” it is always a nice surprise to hear that the dog in tow is one of ours who is doing really well. I also get involved in British Flyball Association flyball racing.

Over the years my numbers of Collies have grown, up to seven at one point, of which four were rescues. Three came on a short term foster but never left!. I am down to five now, three of whom are still rescues with different problems who keep me on my toes. As a breed they are a source of pleasure and enjoyment.

The photo I have included is of me with Lad who I lost at the beginning of Sept 2007. He was a character from the moment he arrived, and it is fitting he should be the one shown on my page for getting me involved with Border Collie Trust G.B. from the early beginnings.